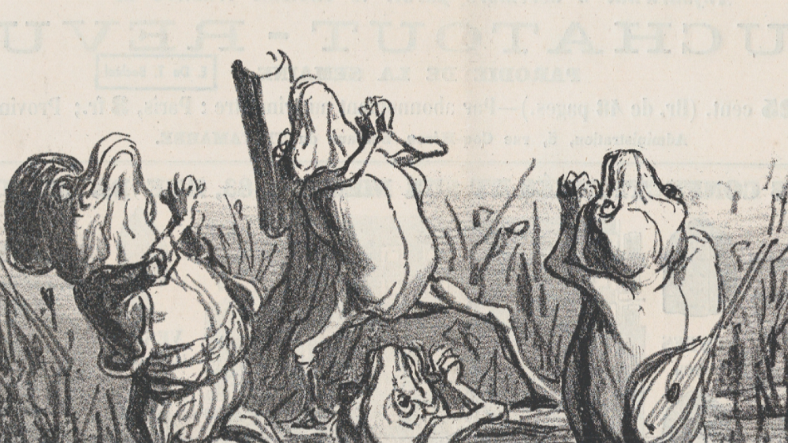 This Week’s Prompt: 128. Individual, by some strange process, retraces the path of evolution and becomes amphibious.

The Prior Research: Back to Tadpoles

It started with my fingers. They’d swollen to about…I think two inches. No, that’s too big, isn’t it? That’d be…I’d have realized something was wrong a lot faster. I think.

But it started with my fingers, they got swollen and sweaty. It was hard to type. That made work hard, because even when I could type, it was not…the keys. I’d hit too many at once if I wasn’t careful, and they got gross. So I had to take breaks. I wore gloves, took my time. But it was annoying. It annoyed other people too.

I thought it was the shampoo, maybe. So I stopped that.

But then my hair started falling out. Lots of it. And my arms, it hurt to lift my arms—wait no, it hurt to lower my arms. To put my arms at my side. To bend them like…back, so that my hands were where my knees were. If that makes sense. It kept my hands on the keys, I’d press to many keys—no, no, past that.

My hair was falling out. I took pictures to prove it. We went to a doctor, asking about the aches, the hair. I remember being frustrated when he just…didn’t have much to say. He sent us to another doctor, I think a skin doctor. And he was confused, but said it shouldn’t be too bad.

“So that’s it? Just take some pain pills, rub some oil, hope it goes away?” I asked…someone. We were going down a road, home I think. They nodded, and said something about it passing. I want to remember how long they said it would take, for this to pass. How much longer until this passes.

That’s how my memories are. Little snippets, floating to the surface, dropping away. I don’t know how long, but I can feel…like ripples on a lake, when you drop a rock in. I can feel where the rock used to be. I wonder if it will come back up, skipping across. If I look down and check—if I dive down to find that rock could I tell it apart from the other rocks?

We got home and the oils helped, and medicine helped. In a way, I mean. I hurt less. I itched less. But my fingers were swollen, and my feet hurt. My knees ached, when I tired to get up—but not how my grandfathers, ached, where bending even a little made him groan. No, my legs…they wouldn’t go straight. They jerked a bit but…

“Its nothing. We’ll make an appointment…until then, just lean on me. Did you send those reports in?”

“I don’t think…their next to the laptop, just need to organize them.” I remember saying. My throat was so dry, I rasped and croaked more than spoke. Barefoot I sat down, hunched over my latop, breathing strained. I managed to get…stuff written. I got it done. I could get it done then, even if the gloves were strained.

The second time, things were worse. There was shouting. There was confusion. The doctors put me in a heavy vest, in weird machines to take pictures of me. They held them in front of me, they had bones on them. I think they were my bones, all bent and fused and strange.

“You can’t be ser—there’s got to be something wrong with the machine.”

“—never seen anything like it, I don’t even know where to begin—”

We saw less doctors for a while. The ones we saw did poke me frequently. And we met with other people, usually by going to places with big crowds. The doctor, I think he was a doctor, would shout a bunch from his wooden hill. And everyone would shout with him.

Instead, after everyone was leaving, we would go back behind it. We’d talk to people, and talk to other people—and then the doctor would hold his hands over me, and say something. Sometimes they asked me to say things back, but my ears were not as good.

I did my best to say the words back, the words that would fix everything.

But it was hard. My tongue didn’t sit right, my teeth weren’t shaped write. My head was bent and squished—I think I used to have five fingers, now only four. My nose had nearly fallen off, and that made it—that made it harder to make the noises you need to make to say the things you want to say.

I had to be wheeled—I couldn’t sit right. She made me a bed on wheels, because sitting hurt my back worse than standing.

I don’t think I had a job anymore. I don’t remember the bright light of my computer that much around then. I didn’t type.

There was a part where I had a thing that made my words into lights and text. I could talk, with effort. I could write reports. I could write friends. I was getting used to that, when my voice gave out. I couldn’t speak…right, not for long enough.

Then it was my eye—somehow, I could use my eyes. I think. I’d move my eyes, this way and that, and it would make words appear. It took getting used to. But I managed. And I could do it still, with the box in front of me.

“Right here, see if you can—yeah, there you go. See, you can still…I mean, it’s a living right?” she said when we got the first piece and I managed to write…something. I can’t even remember what I wrote. It was important, wasn’t it?

It was important, writing about that…fox wasn’t it? It must have been.

It must have been. I worked hard to write that sentence, two or three times. So many times. When did I forget why that sentence mattered?

I drop a rock in the lake, I drop and hope it bounces back, it skips, it passes by the pond lilies, it moves, it builds an island. Build an island in the water.

“—she thinks we need a vet, not a doctor, but that’s not right that’s—”

A rock falls, it ripples, thing stir, scents and colors I can’t see. I can’t remember them all. It drops away, and maybe it will wash near me again. It’s gone.

“Now can you write your name?”

Was it when I wrote with hands? When I could use my voice? My eyes?

It doesn’t matter. I cling to the rock in my head.

And don’t remember the answer.

The original version of this story was a bit…off target I felt, focusing too much on the ‘burden’ of care in a way that could be read as ableist. I rewrote it as such, and I still think I missed the mark–the sort of Kafkaesque story that it is attempting requires a more finely tuned bit of editing and revising than I had. Next time! We will discuss Fauns and Satyrs!