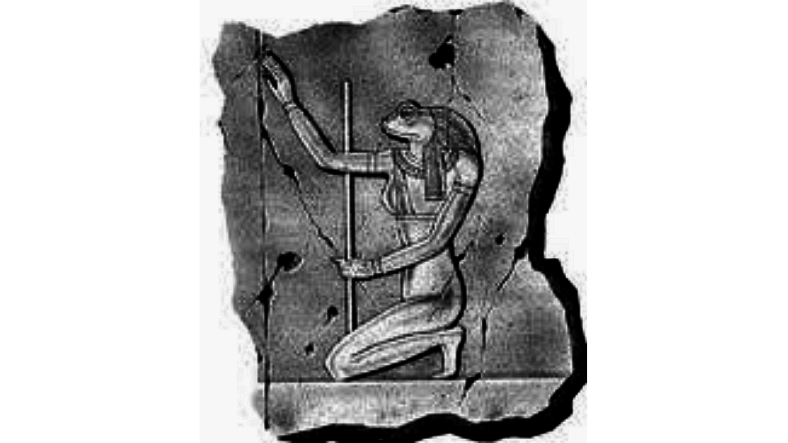 This Week’s Prompt: 128. Individual, by some strange process, retraces the path of evolution and becomes amphibious.

Today we come back to the squamous, the monstrous, the amphibious and the frogs. There is quite a bit to cover. First is the nature of ‘retracing the path of evolution’—this to me calls to mind a very old horror film called the Maze. I haven’t seen the Maze itself, but watched a review of it on YouTube a while ago. The story features the heir to a castle that, being born premature, is frog like. This seems to draw from the story of Glamis, where a child was born malformed and sealed away. This child lived surprisingly long, living over a hundred years. This gossip tells that the child resembled an egg, had a hairy chest but no arms. The rumor seems to have been started by the family of Glamis themselves, in what I must admit seems to be a fit of boredom.

Another unusual amphibian I came across, before doing in depth research, was the Loveland Frog. This is one of many extraterrestrials found across the United States. The Loveland Frog is a large frog like creature, spotted on the road meddling with strange lights. A traveling business man observes the meeting of two or three of these amphibians, before driving off—sometimes startled by their sparks. Further stories by police officers and those near the river fill out the story to include exact sizes and hairy palms to the clawed amphibians. Attempts have been made to link this to stories of frogmen by the Shawnee in the area, but my primary source suggests this is ultimately a doomed endeavor and probably a fallacious one.

The idea of frogs as ancestral beings is of interest to me. We have an example of the Buddha using a golden frog to make the world from Mongolia. We also have the Egyptian deity Keket, a frog like embodiment of the cosmic darkness before reality as well as his female counterpart, and the other watery frog goddess Heqet. Heqet was a water goddess of the Nile and flooding in particular, a source of life for Egypt.

In Australia, we have a story of a particularly greedy frog. This frog, Tiddalik, drank all the fresh water of the world. This of course causes a wilting drought, which the frog must be tricked into ending. An owl and an eel take the primary role here, convincing Tiddalik to take on a number of comical shapes in order to release of the water.  Eventually he does so,  flooding the world and restoring prosperity. This tale does call to mind the water thieves we discussed on patreon, who often met more violent ends.

Frogs as human ancestors might be derived from more common  material, like certain physical commonalities—hands with observable webbing, fingers, and so on. Some frogs, tree frogs notably, even grip objects. The frog’s place as between places—moving from river to land during the course of life—also gives it a place as an ancestor of sorts.  In Hmong stories, a frog has a special place as a creator spirit of humanity. However, humanity killed this spirit—Nplooj Lwg—for lying about the size of the world. The frog cursed humanity, that they would know sickness and death and that the world would experience withering and seasons. He separated humanity from spirits, and set forth extreme heat and deadly rains and so the world would be sick.  Further, death would be a permanent affliction—not one that only lasted thirteen days, as it had been before.

In  Jewish legends, there is a story of a knowledgeable frog shaped demon, born of Adam and Lilith. This creature served later as a teacher to a Rabbi Hanina. The rabbi’s father instructed his son to purchase the item, and died shortly after. The frog was purchased—by mistake, being contained in a silver plate, within a larger silver plate—and ate so much at Sedar that it needed a cabinet to be stored in. The frog continued to grow, however, and ate Rabbi Hanina out of house and home. At last, being vast, it offered to grant him any wish. The pious Palestinian rabbi asked that the frog teach him the Torah—which it did, along with the seventy languages of men. His method of teaching was…eccentric, writing a few words on a scroll and telling his student to swallow it. So he taught the rabbi the languages of beasts and birds. And as a final reward, he went into the woods, and called on the beasts of the woods and all the birds, and they produced jewels for the Rabbi and herbs for his wife.

When discussing amphibious persons, however, it is hard not to add other things to the list. We have focused on frogs, but there are also folklore persons who live in undersea cities.  The Blue Men for instance, are a race of mortals born of a third of the fallen host of Heaven—having fallen not to hell, because they were neutral not on the side of Lucifer. They live lives like mortals in many ways, but had some differences. They could create storms—although these might also be their skyborne brethren fighting. They would swim like a porpoise, not like a man, and if their poetry was not matched they would capsize any poor vessel that crossed their path.

While these particular amphibious men are not accounted for elsewhere, the underseas and rivers of the world are overflowing with civilizations. We discussed some of them on patreon, and some of them here. We can also find a shared inheritor of humanity in the Mayan story of Kumix, where two of his brothers run afoul and are turned into frogs. In the Mayan stories, frogs are padrinos or rain priests, charged with petitioning for rain. This can be heard when they croak before rain fall, and their powers extend well past mere request. One source called them “angels of thunder and rain”, and one divine frog waits in each direction. They sometimes share this duty with toads, a common confusion yours truly makes regularly.  In the story of Kumix, we get a particular origin. Kumix’s full story is perhaps saved for another time, but towards the start of his story he is killed by his four older brothers, and his parts are eaten. He revives himself, and has a series of adventures against the Bronze King, culminating in his ascensions to the heavens. His four brothers also wish to join him in heaven, as he now commands the winds and rain. They construct four large mountains to reach the heavens, and eagles descend down to destroy them and humanity. Kumix uses thunder bolts to level the mountains, and tells his brothers to hide their heads, but being older brothers they stick them out. They were blinded as a result, and turned into frog rain priests, their tears now bringing the rains in November. Kumix ends the tale becoming the sun.

Moving back to popular culture, there are the frogmen of Hellboy–a horror-superhero comic with folkloric influences in spades. These frogmen are connected with the frogs of the Book of Revelation and are in fact quite…sinister, alien, and dangerous, spreading like a plague from ancient deities imprisoned beneath the earth. The frogmen here are connected not to humanities primeval past, but as a disturbing future. Here again they take on a transitional and arguably evolutionary sense, but one of an alien future that is unsuitable for humanity.

So what can we make of these stories? What does it mean to retrace one’s evolutionary steps—a topic I have sidelined here, because we have researched it here and here before, and I have little more to add—and become amphibious? We don’t need the exact cause of this transformation, a Kafka-esque happening is enough. There is a clear undercurrent of ‘degeneration’ in the idea of going ‘back down evolutionary steps’—it is entirely steeped in pseudoscience already to the point of being magical. One perhaps interesting, horrific exploration is the simple horror of one’s body changing, losing functionality, both mental and physical. Losing one’s limbs, one’s ability to walk upright, becoming dependent on water nearby, losing senses as one slowly shifts down and down into an amphibian. Vocal chords shift, thumbs become difficult to use, do even thoughts decay as one’s nervous system shrinks and reverts away? Does the mind?

That is a rather … heavy load for the idea, but might be the best serious approach. I’m not sure I could stretch a simple story of ‘and then Tim was a frog’ for fifteen hundred words. We will have to see how it turns out! What stories of frogs have you heard? What tales of amphibians? We haven’t even touched on salamanders or newts! Let us know in the comments!

Campbell, John Gregorson, Superstitions of the Highlands and the Islands of Scotland, J. MacLehose and sons, 1900.