This Week’s Prompt: 106. A thing that sat on a sleeper’s chest. Gone in morning, but something left behind.

Mr. Lovecraft has here given us a terror that is very common in the world, rife with folklore explanations, and that plagued the man himself in his life. Sleep paralysis is the experience of waking up, but being unable to move, speak, or in anyway act. Victims often hallucinate, and commonly report the sensation that someone or something is in the room with them—something the brain processes as dangerous.

Such an anomalous sensation is the source of many terrors of the night—the most famous perhaps being the nightmare or night hag. In documents across Europe, the night hag finds sleeping people, binds them, and then rides them—like a mare—to her various delights, before returning them exhausted.

At various points in history, the nightmare has been its own spirit, either a being named Mara or a dwarf or the like. However, in English, the spirit quickly became associated with the more common source of supernatural evil: the witch.

Witchcraft reports from England suggest that such enchantment requires the insertion of objects—often sharp and deadly ones, such as scissors—into the victim for the magic to work. Some of these witches sent spirits, supposedly, to disturb the sleep of their victims. Often a these spirits took the form of cats (the recurring internet meme of cats making it impossible to move when they lay on you has some ancient parallels it seems). Other times, the shadow figures are witches themselves, who attempt to strangle their victim as well as prevent them from sleeping.

In South Carolina stories, the night hags are even more nightmarish. They often drink blood of their victims, and sometimes ride their victims without skin. With salt on the floor or certain rituals in a bottle, the Night Hag can be captured in a bottle while trying to reassume her skin. An informant claimed that the hag left a detestable slime when struck by salt—perhaps indicating there is something not entirely human beneath their skin. These hags might go door to door begging for food or hitchhiking, cursing those who show hospitality in a perverse inversion of regular witchcraft.

Witches in Nigeria were also believed to also engage in terrible acts during the night. They might make off with the breath of children, or feast on the souls or psyche. Meetings between witches, in both Africa and Europe, were often described as out of body experiences—as where some of the transformations a witch would engage in. These psychic feasts and meetings are the cause of illness, sickness, and death among communities—often by weakening the victim’s body such that more mundane illness can enter.

Of course, human intervention isn’t the only potential source. In China, Thailand, Poland,  and Uganda (among others) it is the dead that harass the living this way. The kokma of St. Lucia is a ghost, but rather specifically a ghost of a dead child that leaps on and throttles its victims. In Zanzibar, there is a terrible bat like demon that assaults people in their sleep. In Cornwall, the creature is instead a large hairy thing that binds a man down and called the hilla. In Ireland, it is instead a great bird with many talons and wings called tromlui. Beyond cats (who are easily the most common), sheep and roosters also appear as oppressive spirits in the world.

That isn’t to say there is no protection from these powers! Salt in some communities will work, but one particular charm from Anglo Saxon Texts protects against a spidery dwarf creature that enters illness upon the victim:

“Against a dwarf one shall take seven little offerings, such as one has worshipped with, and write these names on each of the offerings: Maximianus, Malchus, Iohannes, Martimianus, Dionisius, Constantinus, Serafion. Then afterwards one shall sing the charm that I say hereafter, first in the left ear, then in the right ear, and then above the top of the man’s head. And then a maiden must go and hang it around his neck, and do so for three days; he will soon be well. Here he came in walking, in spider form. He had his harness in his hand, he said that you were his steed, he put his traces on your neck. Then they began to travel from the ground; so soon they came from the ground, then their limbs began to cool. Then came in walking the beast’s sister; she put an end to this then and swore oaths that this would never harm the sick one, nor that one who might find this charm or knows how to recite it. Amen.So be it”

Here, we see the Seven Sleepers invoked as they often were to protect against sleeping illnesses and the like (We discussed the seven sleepers here). Other cures exist through out the world, from the aforementioned traps to cleansing to finding the witch responsible.

We come then to our story of horror. One of the most fascinating things, implied here, is that an object is left behind by the creature, spirit, or witch. This parting token to me marks not a gift, but rather a cursed object returned or some calling card—I am reminded of the discarded ring from our Netherlands stories that were in fact the doom of the woman who found them. Terror in the night for Lovecraft is not uncommon—the Witch’s House deals with dangerous dreams from living in a cursed place, and the threat of nightmares is common in horror (we could also consider the Hugenot house and other haunted places that torment victims in their dreams). But here, the presence has a dreadful physicality. It is not just terrible dreams—which might precede or follow from the spirits presence—but it is the arrival of something terrible and barely visible in the night.

We had a  similar story with the night monsters earlier—the aswang was our creature then, that slowly revealed itself and well. The story is here. But still, we need I think a distinction between this story’s terror, the vampires we’ve discussed, and the earlier version of this story that we examined with the Horla (here). Making things a bit more difficult, the night hag and it’s many other names does not do much. It sits on a person, it strangles them—an experience that I can say personally is terrifying, but difficult to communicate a whole story about. 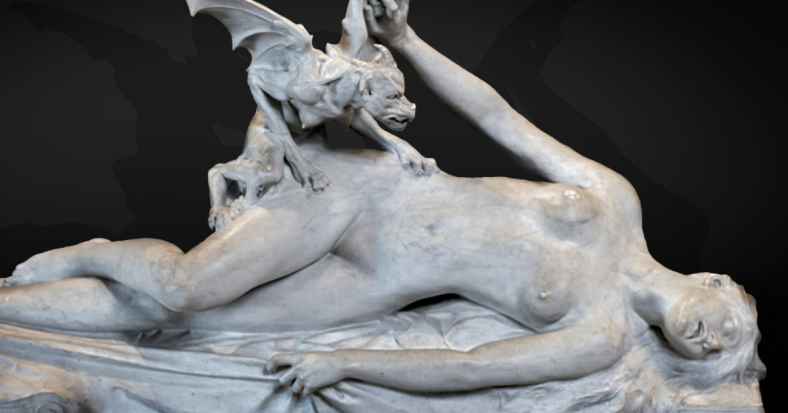 For some surely unknowable reason, all the artistic representations of sleep paralysis and nightmares sitting on people feature attractive women in distress.

Perhaps we can build on the notion or terror of SUNDS—sudden unexpected nocturnal death syndrome, a phenomenon referenced in some of my works as being related to nightmares and their kind. Mysterious and horrific deaths work better than a single stalking thing in the darkness. I have the notion now of a rash of mysterious deaths and killings, as creatures of darkness and night begin to swallow up a town or city—things that perhaps resemble our earlier aswang, that wait until nightfall to make their presence known, while walking in the day in more innocuous forms.

We can play with forms of horror here, I think. There is an existential fear, of falling asleep and not knowing if you will wake up—of falling asleep, and being started awake by some unseen terror—of waking up to terrible news while you were powerless. There is something we can wrap into and work with this story, as well as a monster story that has a resonance with the sleep deprived and brightly lit modern era.

If you’d like to support the Society, receive more stories or research, or feel generous, please check out our Patreon here.

2 thoughts on “Terrors in the Night”