This Weeks Prompt: 96. Unknown fires seen across the hills at night.

The Prior Research:The Hills Are Alive

I told Ron to stay away from the hills that night. I told him, I warned him that there was something not right up there. But he didn’t listen. I guess I didn’t really listen.

It was the fifth or sixth time I’d seen those lights. C’mon, he said, there’s gotta be a party or something out there.  We have to go see, they’ve done it every few months.

They were fucking creepy rave lights. I mean. They weren’t strobing, so maybe they weren’t like as bad as they could be. Maybe just colored headlights behind the hills or something, I don’t—I didn’t know.  So Ron went off with out me.

Ron was the third to go missing—and you know, one’s an oddity, t­­wo’s a coincidence, three’s a pattern.  The lights were gone that night. And the night after that. I even went out to the hill—took me two tries to work up the nerve, but I went out behind that old hill to see if there was anything back there.

Nothing. A bit of a damp spot. That was it.

The cops stopped—well, I thought they stopped—looking after about a month. Nothing. It was a stir, they even printed him on milk cartons. I didn’t even know they still sold milk in cartons…what? Oh right. Next. Well, I—I kinda assumed he’d run away upstate or something. Or met some folks at a party, drank something wrong, and was now in a shallow ditch missing a kidney. I keep going back to the hills, look around for any trace. Tire tracks from the head lights, or even just…just something he’d dropped maybe.

Nope. Yeah, nothing. All he left was a pen. Small gel pen he gave me in class that day. He left clothes and stuff in his house, but nothing on the hill. Not even like a busted button or bit of string. That’s when I started getting—okay, yeah, getting a bit weird.

His parents let me borrow one of his jackets. I mean. They didn’t stop me. I started going out from the hill. I’ve got—I’ve got this map of the area, and I figured he’d have to have left something right? It’d been weeks, and nothing but still. People can’t just vanish into the ground. He had to have left something.

So I went out. I started going for walks, walks pretty late. I’d just…just walk to the nearest spot from the hill. Where he might have wandered off. There was a tree, I found a campsite near a tree. It was a big one, looked kinda like a two tiered umbrella.  I got excited, I found stuff. You know. People stuff.

But that was a boyscout camp that had forgot to clean up after itself.

I tried the other direction, and found some litter about two miles out. I started marking all these little places on my map, so I didn’t double take. And, about three days ago, I noticed it. There’s a mile around the hill, in all directions, where there’s no one. Or nothing. 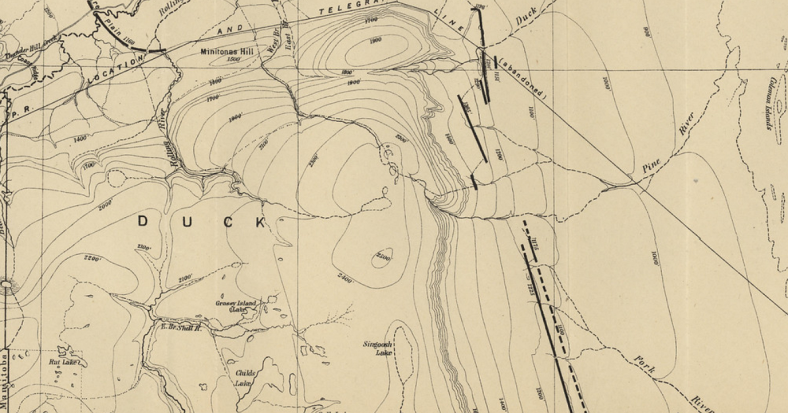 Like. There’s the old abandoned mill, and some of weird red silo building in the wood. But those are a mile and a half out. There’s Mr. Ottar’s farm. But again. Mile out, and right on the mile, stops. There’s no litter over the mile line. Perfectly clean, perfectly kept grass.

People lost toys in the woods. Things died on the road that past by. The old railroads even gave it a wide breadth.

That’s weird right? I don’t know. I mean. No one ever talked about it. I know on Halloween, kids went to the old Gretch home, to see ghosts. I went once, just got a scare from Ron and a big dog. I mean, not Ron’s dog…never found out who’s dog that was actually. You’d think a big one like that would make a lot of noise, but maybe he’s well trained.

Anyway. There’s other weird places. Again, woods is full of ‘oh I saw a gorilla out there’ or ‘oh my dead grandpa visited me’ or ‘once I heard a woman screaming at midnight’. And, and alright. Fine. Cool. But the hill? There’s nothing.

I asked Mr. Ottar about it. He said some teens were setting off fireworks out there—had been since he moved to town in the fifties. Which, obviously, is impossible. But I kept at it, and he said he’d never found anything out there—never looked too hard, said it was a pretty boring spot. But he’d seen people out there, and lights, and heard music, so he knew what it was.

But no one’s been there. No one’s been out behind the hills, and Mr. Ottar said they’d been around since he moved—and that was in the fifties. And that’s not his memory! I checked, I went to the city hall and checked and he’s been there since 1952.

I checked. I checked twice. I asked everyone I met, as normally as I could, if they’d ever been to a party out in the hills. A few asked if I was hosting one, and mentioned it seemed like a boring place. A few mentioned the freaky lights.

The lights hadn’t come back yet.

Would I have noticed?

Could I have noticed?

I mean, I was ten. I didn’t notice you were there, did I? Ten years old, high school kids like. They can just go to college, like a dog going to a farm. How long—I mean, someone would have noticed? They noticed this time. They checked. We aren’t a big enough town for someone to go missing every few months and no one notice, we’re not like fucking New York or something.

But I went on with it. I marked and plotted the dissapperances and the lights. I asked about the lights, if people had seen them. A few had driving, one or two had walking late at night. A few saw a big dog around there, but that seemed…probably wrong. I mean. A big dog would have made noise, and there weren’t any tracks up there. Nothing left of a dog.

Anyway. I got something like a pattern. Finally. I had a few days to figure this out. What to bring, who to tell, where to wait. I mean. I said I was going out stargazing for a project, and my parents just sort of shrugged.

I heard music. I heard a thumping, thudding music. I thought it was some party down the road, but as I started down the path, no. It was from the hills.

Lights shinging soft but bright over the hill—blue, green, yellow, orange. They were so much…more than before. Much warmer. Much more inviting. I mean. I was heading there anyway. It didn’t matter much.

It was different, having a beat to walk to. I mean sometimes I listened to music when I went out, but paranoia kept me on edge. What if something snuck up on me? What if whatever it was caught me? Bouncing along to a beat was something different.

I got to the mile mark. The grass was so green, and there was something…sweet in the air. It smelled like strawberries. It—I could see people over there. Waiting.

I was holding Ron’s coat still. I saw him there. It had been ages. He was right there. There were dozens of people there. It was such a …it was so alive. So full. There were so many…so many things.

I almost made it across. I almost stepped over the other side.

And then. I was here. I was in a room. This is a room right? I was in a white room, with a white light, a red chair, and a small table. Someone came by, gave me some water, and left.  Then you asked about Ron. I don’t think you came into the room—I’d remember that I think. But you’re in the room now.

How did I get here?

I ended up rewriting this story from scratch 3 times, and I’m still not entirely satisfied. I don’t think I ever reached a satisfactory idea of what it was about, except the vague notion of people being lured off by a fire. Which…I think my best work is a bit more than that.

Next time, we go into forests plagued with strange and dangerous things!

One thought on “Lights Away”