This Week’s Prompt: 74. Italian revenge—killing self in cell with enemy—under castle.

The Prior Research:Revenge Most Cruel

“I had forgotten you still had this, Ottobuno.” Venerio exclaimed as we arrived at the lone castle to my families name. It was a stone edifice, bare of most adornments within and without—sacrifices to be made to keep the walls themselves.

“Is the village still there, where we once played?” Venerio asked, peering from the hill off towards the seashore.

“More or less, although the fishermen have mostly left.” I said, smiling. Oh those golden halcyon days, when we were young. Running side by side, having slipped away from lessons to steal fish for ourselves. Summer days that seemed they would never end. They tasted bitter now in my head.

“Well, that is a shame. I hope someone still collects their fish.”Venerio said, gesturing for my servant to open the door. “Never was their tastier ones.”

“We may not dine on them, but certainly from the balcony we could see the sea.” I said, walking down the hallway steps, checking my belongings.

“Ah, the balcony…a day such as this, with an evening breeze would be delightful.” Venerio replied. We moved through the halls, and up the stairs—past parapets that had not seen shot nor arrow in almost a century now. So remote was this place, that time and war had forgotten parts.

“Hold one moment.” Venerio said, pausing before a tapestry. I turned on my heel. He was dragging this affair out almost intolerably. The painting he had stopped to look at was an old one—on it was St. Michael, driving his spear into the twisting serpent of hell. The spear’s cross-guard was a crucifix, and at the other end Christ reached down to carry forth a mass that had been trapped beneath the serpents head. Vernon’s eyes traced the spear’s shaft into the winged archangel’s hands, his own almost touching it.

“Is this one of Ricardo’s pieces?” Venerio asked slowly. “It has some of his…wonderful imagery to it.”

“Yes, one of the older ones we commissioned from him.” I said, nodding and taking a step to the side to appreciate the site. “He’s quite capable of capturing the wondrous in his work, isn’t he?”

“That he is, that he is. Did you see the new piece we commissioned? It was just finished, third in the set. It’s of Paradise, but with mother and father as Adam and Eve.” Venerio said, nodding.

“…Then that leaves to you Cain or Abel?” I asked, eyes narrow some. Venerio laughed. How I hated that light, high laugh. Small needles in my skin.

“Ah, no, I do not feature yet. Perhaps I will be a frolicking child or take on one of the Judges faces. Do you think I would make good Gideon?” Venerio asked, puffing out his chest, hands on his hips.

“Perhaps, if not a Samson.” I said with a chuckle. “You have the face for it at least. A jawbone would look strange in your hands though.”

“Maybe two, if the trades east are good—spices for pigments after all.” Venerio said, lightly wrapping an arm around my shoulder. “Why, maybe we can get one of you—a Solomon or Absalom, with such hair.”

I laughed, my eyes fixed as he burst. He looked so innocent when he laughed—as if he didn’t know I would have had a picture of a saint already if not for him. If those spices came on our ships, we would be dining at a villa, not a dusty castle. If we had been but five years, not a decade, earlier, Ricardo would be painting my parents again. The laugh is an opaque mask, but certainty of purpose lets me see clearly. 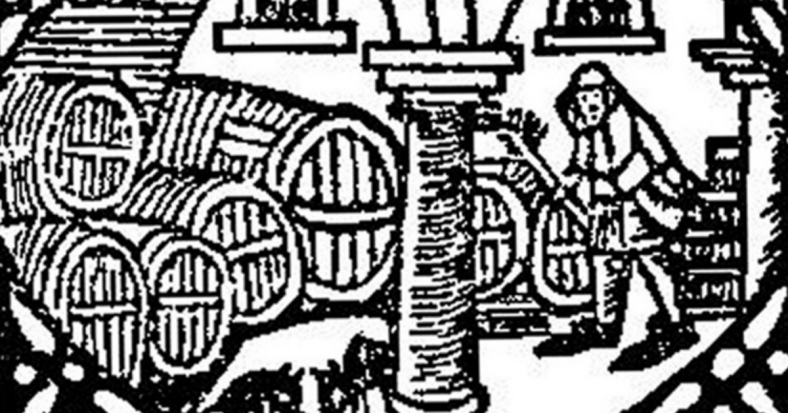 He attended me on the balcony, where we drank wine in celebration of the coming spring. He had entertained me only a month prior for Christmas—a misbegotten act of charity. That night, that horribly night when he offered me—me! Who’s ancestors were Senators of Rome!–charity. He told me that hard times were upon me. He confided in me that night that, he knew a fine heiress who might value my name and pity me. Pity enough, perhaps, for an arrangement or marriage while I still had my youth. He told me, me that he could not bare to see me decay away in my old family homes.

I felt the knife in my pocket to cool my nerves. It’s blade, its hilt, its carved crest of his wretched thieving family. It was set. It was all set for this night.

“Ah, the gods,they have forsaken us! There is no more wine!” Venerio said, turning the bottle upside down. A drop of red wine fell to the table, staining the white table cloth.

“Not yet, not yet. I have an old cask down below, filled to the top.” I said, raising my glass. “And who better to share it with, on this night. No finer wine exists in my line.”

“The best wine? Why, we are already drunk! You’ll waste it.” Venerio laughed again, cutting my ears.

“Ah, no, a man only truly appreciates wine when drunk.” I said, standing with exaggerated pauses. My mind was, in truth, clear as day. A great lens it made, bringing the world into greater focus. I wondered, did my blood have warmth still? Or if he touched my hand as we caroused down the stairs, did it feel as cold as the Northern Sea?

The cellar was down several rows of stairs. It was only with the guidance of my deft hand that Vernon did not meet his fate at the hands of the stone stairs or walls. Drunkard and fool. But death would not come so swift. As he stumbled into the room, nearly collapsing over the wine, I shut the door—and locked it with an iron key.

“This…this the wine?” Venerio asked, striking the barrel with an open palm.

“Yes, the best in the family.” I said, drawing the knife and walking over. I paused. There was still one last step. He was trapped here—the servants had seen him and me enter, alone. Venerio’s habits were no secret—the power of alcohol over him was second only to God Himself. All was set for the final, fatal step.

I drew back the knife before Venerio eyes and drove it into my side.

“Christs wounds what are you doing Buno?” Venerio said, staggering back in shock, as I pushed the blade across. It was warm, my blood was warm as I staggered forward, dropping the knife on the cask.

“Not…rotting away…” I said, with a laugh. His face at that laugh—did he still pity me? No, no I wouldn’t have him pity me.

“Don’t you see, you fool? Your all alone—with me and the knife.” I said as my head began to ache for the lost blood. “They all saw you, drunk as ever, come down here with me! Run and hide, it doesn’t matter—when they find me, they’ll know who it was that did the deed!”

Venerio backed away slowly, the knife clattering to the floor.

“And then.” I said, smiling. “Then they’ll hang you from the rafters—you and one day your thieving parents and your whole wretched house. The knife was your knife, they’ll know what kind of cut-purses and villains you are.”

My voice began to dwindle, curses half formed on my lips as blood pooled on the floor. I saw him run, but I am not afraid. Here in this forest, I wait—I know he’ll be down here, down in the frozen wastes.

I’m going to write a bit more on the writing of this story then normal. The story’s initial pitch is tragic over the top Edgar Allen Poe horror. It’s a story of vengeance that is literally self destructive. But it’s also about suicide.

I’ve had several friends who were suicidal—and several who actually took their own lives. That fact was true when doing my research, but the impact of it only became clear when I sat down to try and write the story. And…well, it made writing the story more taxing then normal. While the story was delayed some so I could finish the Patreon rewrite of Demophon—which was delayed because of moving in Morocco and other work—it was also delayed because writing a suicide scene was…well, almost too much. Almost.

I usually say if a story I’m writing scares me, it’s a good sign. The Muse story still unnerves me, for instance. But this…this was a bit much.

With that said, next week we return to more lighthearted affairs. Black Mass beneath a church’s ruin. It’s gonna get witchy.

One thought on “The Wound”