This Week’s Prompt: 70. Tone of extreme phantasy. Man transformed to island or mountain.

The Resulting Story: Mountain out of a Man

The creation of a mountain or island or even the world from a single person or creatures is far from new. We discussed last year the tradition of murder at the dawn of time—of great primeval crocodiles and serpents and monsters of the sea that oppose sky gods and are murdered for it. Among these many beasts, there are a handful that in turn are laid out to form the foundation of the world—a testament to their size and to their importance in the world. 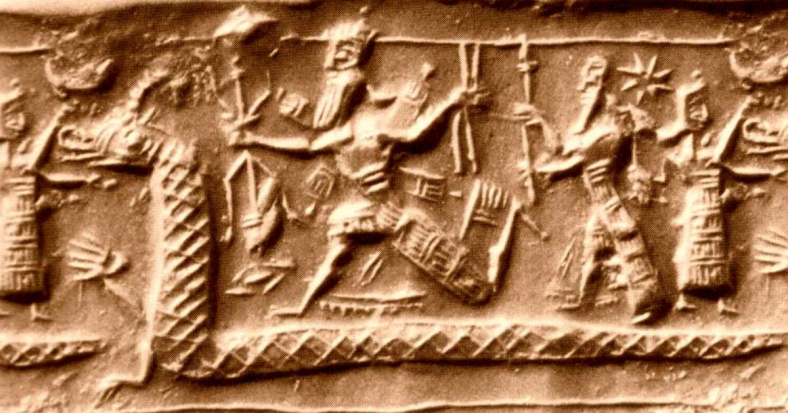 The first example of such a creature we will discuss is the most malicious. Tiamat is a vast mother goddess, the primordial salt water sea that rages at the death of her husband the freshwater sea. In her war with her grand children she :

Made in addition weapons invincible; she spawned monster-serpents,

Sharp of tooth, and merciless of fang;

With poison, instead of blood, she filled their bodies.

Fierce monster-vipers she clothed with terror,

With splendor she decked them, she made them of lofty stature.

Whoever beheld them, terror overcame him,

Their bodies reared up and none could withstand their attack.

She set up vipers and dragons, and the monster Lahamu,

And hurricanes, and raging hounds, and scorpion-men,

And mighty tempests, and fish-men, and rams;

They bore cruel weapons, without fear of the fight.

Her commands were mighty, none could resist them;

After this fashion, huge of stature, she made eleven [kinds of] monsters.

Her exalted commander, Kingu, bore the Tablets of Destiny and power over all the gods! Tiamat’s shape is hard to say. While moderns may think of her as a great dragon, she appears in some cases more like a cow with great udders, and certainly odder then most reptiles with her lips. Each portion of her is divided up to make the cosmos—the sky is held by her ribs, her tears are the Tigris and Euphrates, the Milky Way is her tail. The blood of Kingu was used to make mankind. 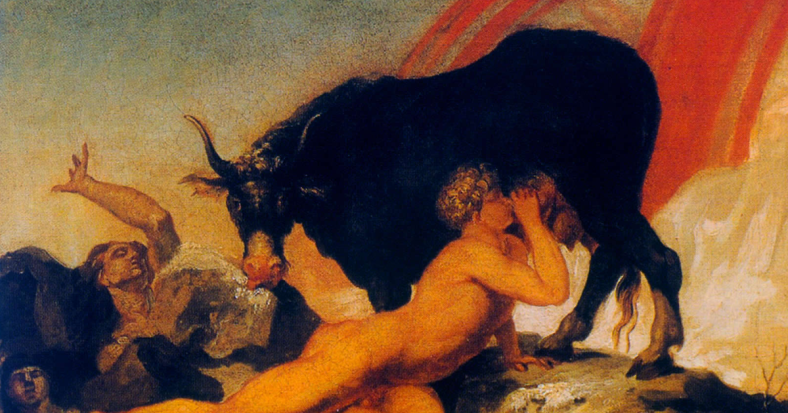 Ymir and his cow

The other example is Ymir—First living thing of the Norse mythos, born when the lands of fire and frost met. At this point, the great first giant emerged—Ymir. And shortly after he found his great cow companion—to my knowledge, this is unrelated to Paul Bunyan. He persisted like this for a time, fathering the frost giants. Eventually, however, the sons of Bor—Odin, Ville, and Ve—slew him and arranged the cosmos from his body. From his skull, they made the heavens. From his hair, forests. His bones became the hills, the seas run with his blood. His brains were made into clouds, his eyebrows were men. And in one case, the maggots that fed on his corpse became the dwarfs. 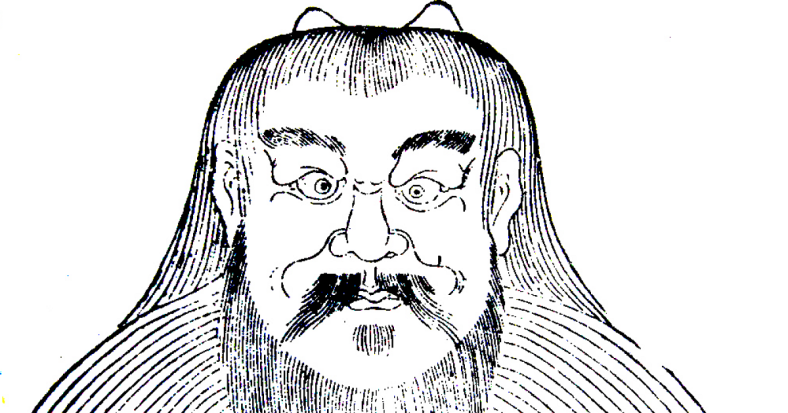 Less malicious is the act of Pangu. Pangu is from Chinese myth, and takes on his form not from a violent ambush or great war, but as he comes to old age. In his early years, with the aid of four beasts, Pangu separated the earths and heavens to make a habitable cosmos and cut Yin from Yang with a great ax. But as time went on, he came to grow old and die at the age of 18,000. Slowly, he takes on the form of the world as he passes on into death. Like Ymir, his body is divided up into various parts of the world. The wind is his breath, the thunder his voice, his left eye floats upwards to be the sun, his right eye is now the moon. The fleas on his body became animals, his beard became the milky way, his head mountains, his bone marrow great diamonds. 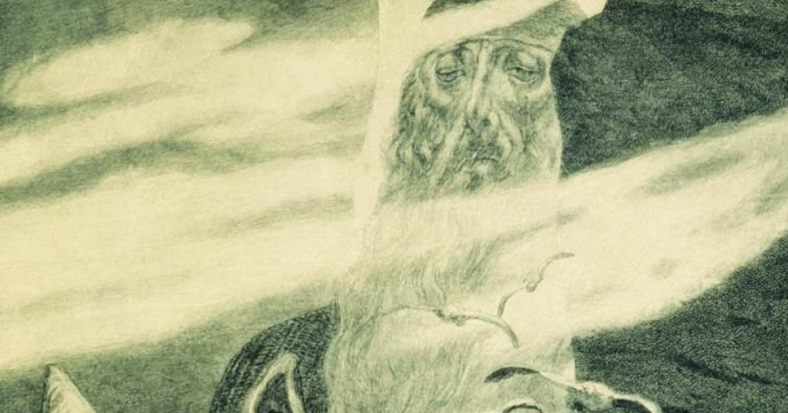 Svyatogor coming on his steed

There are other, debatable examples. Typhon, for instance, was trapped beneath a mountain and an island in one version of his myth. But trapped is not the same as became, I don’t think. More directly linked to our tale is the Russian bogatyr, Svyatogor. Svyatogor is a mountainous man, who eventually lays down in his own stone coffin to die. He passes his strength on to Illya, the greatest of the bogatyrs, through his breath. 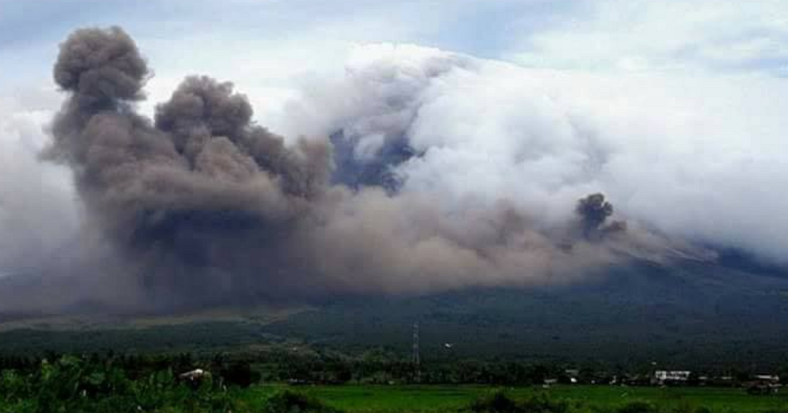 Perhaps the least malicious, even less than Pangu, is Mt. Mayon. Mt. Mayon is the result of a tale of love between Magayon and the prince Panganoron. The two’s relationship enrages the failed suitor Pagtuga, who gathers his warrior s and steals Magayon’s father. The ensuing war sees the lovers victorious, but Patgua’s warriors shoot one of the two—versions differ—on the way home. The other commits suicide, and are both are buried. After their burial, a mountain arises from their graves—Mt. Mayon, a still active volcano.

Fictionally, I’m again reminded of the story of YISUN from Kill Siz Billion Demons, who destroys themselves to create a pair of gods, who in turn make all gods. This generation of gods in turn gives themselves over entirely to death in order to create a world each—with life and creatures spreading forth from their holy city of Throne.

The stories so far touch mostly on great cosmic creations. I think ours will be more like Mt. Mayon—a place of legend, yes, but not as grand as the entire world. Our story, as one of ‘phantasy’ instead of horror, I feel a cataclysmic battle less of interest then the slow, gradual expansion of a mind. We start with a body, a man or woman, and slowly they become something more—something vaster, and often covered in life. We can consider, perhaps, that both mountains and islands are found in groups—ranges and chains. At the same time, they can be quite lonely places. A deserted island or a lonely mountain is not an uncommon description.

The nature of this story will be, I think, entirely atmosphere—it could be horror, but it feels more calm and meditative and thus perhaps a bit strange for this blog. Still, it will be an engaging story to write and place to explore. Spacing and pacing the progress from mortal to monument might be difficult. It requires attention to sentence length, to description, to punctuation, and to variation. Atmosphere and mood are, in my opinion, far harder to grasp and far more essential then action or characterization. To make a house feel alive is no easy feat.

2 thoughts on “The Root of the Mountain”