The Research:Kobolds, Goblins, and Demons Beneath Your Feet

The fields outside the manor house always seemed to buzz after the rain. Jameson had heard from the senior staff supervising the old building that it was the cicadas waking, and certainly it sounded like the summer buzz of breeding insects. But Jameson had never found that comforting. As a child in the Southwest, the cicadas were a presence heard but never seen. He sometimes was convinced that it was actually the leaves and seeds of the trees burning under the heat of the sun.

But the fields couldn’t be burning, even if the grass almost seemed to light when the sun set behind them. Jameson knew better than to expect that. IT was the rain season. Fires never happen during the rain season. And here, the rain could last for days. The mountains blocked off any clouds that came from the sea, so a down pour would last until the clouds finally passed.

It was actually the seventh straight day of rain that Jameson and Jonathon observed that morning.

“You’d think the buzzing would stop with the rain.” Jameson said, sipping from the warm coffee he had. “But it’s almost like they go into a heat with the water.”

“Aren’t mosquitos like that? Love water and stuff?” Jonathon asked.

“No, no, skeeters like the warm, still standing stuff. They freeze up like most anything.” Jameson said with a shrug.

“Well, they burrow underground right? I imagine it must be flooding down there.” Jonathan replied. “And I mean, if I was trapped in a flooding tunnel –a”

“Hush, hear that?” Jameson said, holding his hand up. The buzzing of the cicadas had grown, and now a second sound echoed behind it. Something more like… “Is that a drill?”

Jonathan stood at once, and Jameson pushed away from the table. Squinting into the rain, barely visible in the field, was a widening pile of dirt. A small pyramid emerged, whirling faster than anything they expected. It grew on the horizon until it was the size of a house, a glittering red light peering from it’s side. Soon another followed it, and another. About half a dozen pyramids, forming a line around the visible portion of the grounds. “Who…Who do we call about this?” Jameson asked, as one of the pyramids tops slowly began emitting a deep red light.

“No one.” Jonathan said slowly, waving his phone around. “Signals gone.”

“…well, if that ain’t ominous.” Jameson said, turning back to the field. “Think it’s them? Think their aliens or something?”

“Could be the storm. Doesn’t much matter, because I intend to wait this out in the basement.” Jonathan said, pulling Jameson along. “Because if it’s not the storm than those things are probably responsible and their isn’t a decent reason to cut off someone’s reception, not unless your planning something that frankly I don’t—”

Before Jonathan could finish blurting out his thought, there was a loud crack from the bottom floor. Followed by another, longer creeking sound. Peering over the stair, they saw another pyramid rising, a spear point smashing through the floor. Before their eyes, the sides slumped off, making a four pointed star on the floor. 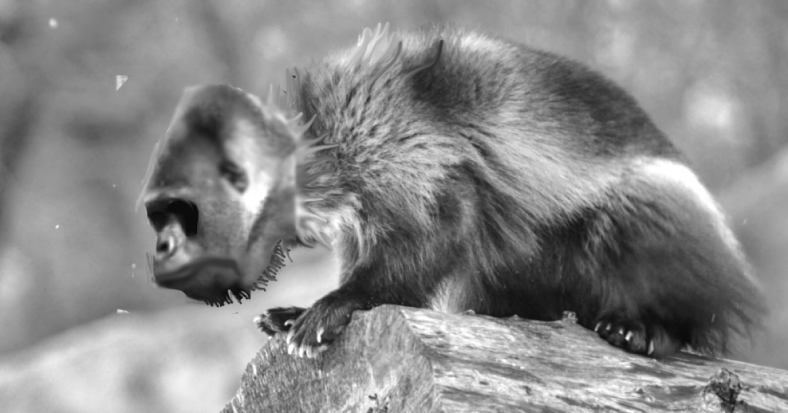 Slowly out came a thing that bore a resemblance to the wild men sometimes poking outside of paintings of forests and pagan rights. Long hands felt outward as a short, stocky creature covered in pale fur came forth. It was dripping wet, and moved more like a chimp then a man. But it’s fingers were almost reptilian, long serrated claws scratching the floor as it walked. It’s head was large and wide, like the top of mushroom. A tooth jaw ideally opened and closed, the long tounge of a serpent flicking out.

Neither Jonathan nor Jameson waited long upon seeing the thing before running up the stairs again. They almost tripped over themselves, running up the stairs to the topmost floor, trying to put as much distance between themselves and the strange machinery. When the skidded into the dancing hall, unused for the last thirty years, they slammed the door behind them.

What followed was a blur of activity, as the two of them piled the chairs and tables into a makeshift barricade on the door they came through and the side exits, leaving the servants exit free in case of escape. It was a fine looking barricade, with shining gold finery around the edges and white cushions making up a not insiginficant amount of bulk. Its practical ability was an unknown to either Jameson or Jonathan, nethier having spent much time around barricades.

Jonathan leaned against the larger window at the back, rolling his head to look outside again. In the distance, obscured by pouring rain, were more of the pyramids. Out of them ran a wave of the creatures, some carrying long pitch forks and others things that resembled a rifle with a drill bit at the end. But something else caught his eye.

“Christ, what are they doing out there?” Jonathan said, his shoulders slumping. A number of the gardening staff hadn’t yet come in from the rain, or maybe had been sent out in spite of it. As Jameson got closer to the window, he saw the descending horde of things falling on them with sticks and flashes of light, dragging away the dead or unconcious towards their pyramids.

“What do you think their doing with’em?” Jameson wondered. There was a sudden thump on the barricaded door. Both of them jumped and Jameson grabbed a chair as a meager weapon.

“Well, we might find out. Any idea of where to head from here?” He asked. Jonathan was doing his best to find the door handle to the servants passage again.

“Er, well, there is one place. Central tower garden might be safe. But we’d have to go down.” The clasp clicked open. “And they’re already down there.” 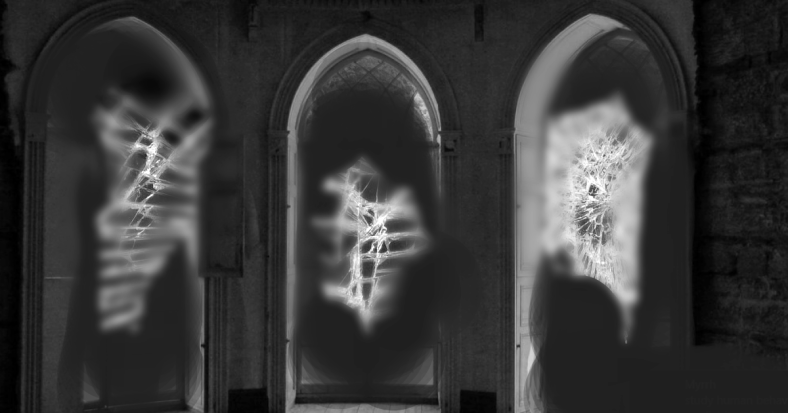 A click-click-click sound came from outside as Jonathan finished. Jameson slowly moved back to the window and, looking down, saw long metal ladder affixing themselves like vines along the wall.

“Well, in a moment they’ll be up here too. Open up and lets get out of here.” Jameson said, hurrying towards the door. Sure enough, moments after they closed it and began rushing down, there was the sound of smashed glass overhead. The two continued until they at last reached the courtyard.

The central tower of the manor was a tall, calcified thing.It had vines and pipes reaching up to the top apartment, and then spanning out to water the many garden plots around it. It had one door, around the front. Which, to Jonathan and Jameson’s shock, was locked.

The shock was in part due to the sound of clambering feet from the main hall, and the realization that the strange and terrible things were going to come for them at any second, with the last possible hold out no longer availible. The clambering and clanking of metal behind them, the sound of a centipedes worth of clattering feet certainly made the shock more clear.

But more immediate was the fact that only the family of the manor could lock the door. The interior lock require a key, both Jameson and Jonathan knew. They needed to get one of the kids to lend their key when locking it up every night. And the full implications began to sink in.

“Let us in you bastards!” Jameson shouted, smashing the chair he had brought on the door. Jonathan stared blankly a head as Jameson beat on the door with the remains of the chair legs, growing smaller and more splintered with every blow.

The family within the tower had had some warning. This had occurred before, about three decades prior. Once every thirty years or so. The patron of the house watched over the hills as the rain began ot die down, as the pyramids began to sink into the grown. It was one hell of a storm. The damage was severe, and the hush money for questions would probably be worse this year. Still. At least the inane buzzing had stopped for now.

This corpse was a fighter. I had another story ready, but the horror aspect didn’t click. so I started again from scratch. And then half of it was lossed in a computer incident. The result is a story I’m not the most proud of, but that could be expanded in interesting ways later.

Next week we will be looking into a lost castle across the vast gulf of time.

One thought on “Invasion From Below”