The Resulting Story: Invasion From Below

Well, this prompt has lead down some strange rabbit holes. The corpse specifically deals with creatures underground, burrowing in a method that reminds me of locusts or cicadas. The underground is full of strange creatures, but when it comes to sheer numbers and the sort of clamoring that forms indicates only a few key cases, from folklore and urban legends that is.

First is the Kobold, who resembles a diminutive man, despite claims by Wizards of the Coast and Paizo. Kobolds dwell either in mines, aboard ships, or in houses, and are creatures of German extraction. We will be focusing on the mining branch, who have the most mixed reputation. These kobolds are reportedly expert miners and desirous of precious metals. They themselves can enchant metals, making fools gold or metals that cause a burning sensation. They are also responsible, it is believed, for the creation of cobalt. It is they who give cobalt it’s arsenic content and poisonous power.

Kobolds sometimes preform helpful deeds, debatedly. They get the name Koblod for their tendency to knock on mine walls. The knocking either marks a region that miners ought to avoid, as it is dangerous, or one that they should mine for a thick vein of ore. This knocking habit persists into the Kobolds relatives, the Coblynau. The Coblynau are, however, always malevolent and frequently cause landslides in their never ending mining. 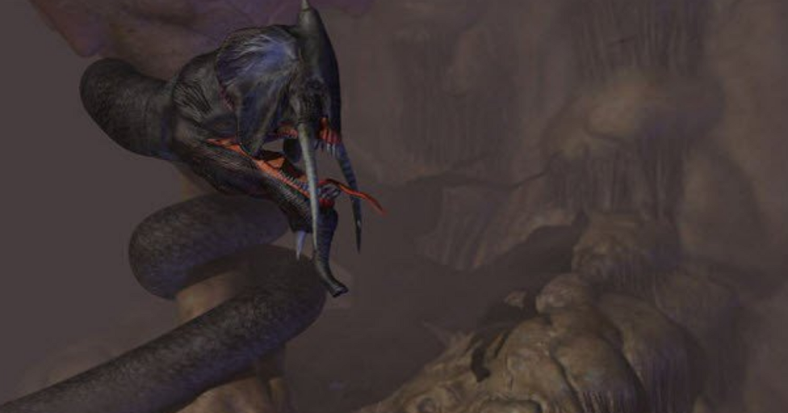 In South Africa, far yet close to the German Kobolod, we have another creature. A favorite of mine: The Grootslang. The Grootslang was the first creation of the Gods, when they were new to the work of making life. They made the Grootslang too mighty, and split it into two creatures (snakes and elephants). But one of the Grootslang escaped, and from it came the whole dread species. Grootslangs lust for gems and gold, akin to dragons. They are cunning and cruel creatures, but susceptible therefore to bribery.

There are less …demonic inhabitants below of course. We have the urban legend of ‘molemen’, groups of homeless and oppressed people driven into subways and sewers for their entire lives. There they form, according to myth, tribes and nations of their own, governed by their own laws. There are some…obviously uncomfortable implications to discussing those that society has suppressed as living in underground societies of barbarity. But that is the legend. There is something in this myth in particular that could be reversed, the rising of those condemned against those that would damn them. The oppressed gripping the oppressor by the throat…

But that might be leaving the prompt a bit.

In more typical realms of genre, there is the field of Subterranean Fiction. Jules Verne is perhaps the most famous here, but given that his explorations do not deal with something intellgient enough to call demons, we will look instead to a few other authors in the genre.

It would be strange to leave out Mr. Lovecraft himself, with the world of K’n-yan. The underground of K’n-yan is ruled by people who resemble First Peoples and possess advanced technology. They can materialize and dematerialize at will. The command undead slaves of conquered races and are ruled by eugenically engineered men and women. Once they worshiped Tsathoggua, but learned his nature and abandoned him.

With them dwell the remains of the snakemen, who we discussed more here. And in the depths of the cavern is Tsathogua himself, dread great old one surrounded by living oozes.

Mr. Lovecraft then aside, there is the work of Edward Bulwer-Lytton. This accounts not for demons, but rather a race of ‘superior’ subterranean humans that manipulate life energy. This ties into the accountants by Theosphanists, a group who’s writings make fine genre work but are tinged forever by racist and white supremacist implications if not handled properly. Ironically, I wonder if the people of K’n-yan were meant as something of an insult to the work of Edward Bulwer-Lytton. Intriguing if true.

With all this in mind, what are we to do? Well, we have some compelling examples of complex relations between surface dwellers and those below. The idea of inherent hostility in the underground works well for horror, and the setting in a liminal place between above and below would work well. A subway, a mine shaft, a cave entrance. A place between the two worlds, perhaps the spot of their divergence.

The action of the story is probably the arising of the ‘demons’ whatever form they take, coming up from the underground. The analogy of locusts rising might be fitting here, a wave of death arising from below. There is some revolutionary undertones to that …well, phrasing. Revolutions often have horrors in them, either in the build up or execution.

The other solution, perhaps the one that can mesh into this as easily, is a stranger stumbling into the hostile world below. A journey into the literal underworld, as Dante and Aeneas have undergone. We’ve gone over such journeys elsewhere, but those where far more metaphorical journeys below. This would be tumbling into a strange, hostile land of demons waiting to overtake the world. Whether they are revolutionaries or conquerors, such a place could hold a host of horrors. It must have wealth, that much is clear from most myths. And that makes a fairly good amount of sense. The ground is where growth comes from and where ores are found.

It might be wise to blurr the line between conqueror and revolutionary, to make the nature of the demons uncertain and unclear. I would point the group as coming up from below, surging beneath some manor or castle, in order to begin either a revolt or a conquest. It is probable that the footmen do not know which the sudden surge of demons is. If that is the case, then there is horror to be found in being swept up in a terror that you bear little knowledge if not responsibllity for.

I will have to think this over, I don’t quite have a full story in mind yet. There is so many possibillities that I have yet to narrow them down in a meaningful way.

I will note one other obvious source of inspiration: the videogame Undertale. I…have not finished it, so can only recommend it by reputation and the little progress I have made so far.

In a similar vein, I’d like to call your attention to a horror contest that might interest you, as it’s themes resemble this prompt. You can find it here. My story here will, of course, not be an entry in that competition. </span

3 thoughts on “Kobolds, Goblins, and Demons Beneath Your Feet”