That said, let us proceed. Seekonk is a town in both Massachusetts and Rhode Island. It’s history, from what I can understand as a non-expert in the region, is marked mainly by conflict between settlers and the Wampanoag, a group of Massachusetts natives. Notably there is the instance of King Phillips War, a conflict that ended the way most conflicts between European powers and indigenous populations goes. King Phillip (real name Metacomet) had the privilege of having his head removed and stuck on a pike outside an English settlement. Grizzly.

Seekonk is also near another interesting location: Hanton City. Hanton is an abandoned town, founded during the revolutionary era by…someone. It is still uncertain who, with theories ranging from runaway slaves to loyalists in the war. Now, with the term “exodus”, I am inclined to think of slaves. I bring Hanton up not only as an oddity, but as a place as abandoned as Providence appears to be 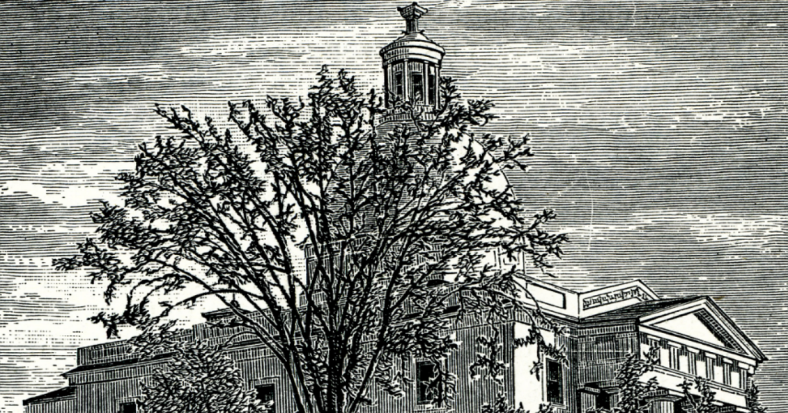 .
Pinning down the Congregational Dome has been tricky, as two different churches have congregational domes. However, where I to pick one, I think I would stick with the 1700s possibility. That would mean the Central Congregational Church, pictured below.
That all being said, what is happening in our story? Well, the language of the prompt clearly points to something divine in nature. The term exodus is loaded in Western works, conjuring immediately the book of Torah. There is, also, the fact that Providence is the site of our story. Yes, it is the capital of Rhode Island, but the name brings divine insight to mind. The Congregational dome is a holy object, and it’s fall is…ominous in the most literal sense of the term.
That brings us to the two omens: the ebbing tide and the bolt from the sky. What these means, I cannot say precisely except that they are common symbols. If I was to give them anything in particular, I would have the ebbing tide reveal some sea stones best abandoned, or some wrecks best lost. The sort of thing that haunts a lot of the North East in Mr. Lovecraft’s work.

I was able to only find one good source on Rhode Island folklore, and that from the 1950s. Still, it has a few elements that may be useful. Rhode Island has an apparent history of witches with cases ranging from a child named Sarah during the revolutionary war to an unnamed woman in 1892. Witch stories abound, particular in North Kingstown. Silver buttons were said to disrupt such spells. But a witch is not divine enough to call an exodus, nor do they lead to the sea.

A contemporary of the Palatine

The Sea Tales are just as extraordinary, however. The Palantine, a German vessel, has been seen off the coast for over a hundred years shining out from the night. Ghosts from the old harbor call out at night for help, but ghosts are wont to do that. At least one captain, cursing the world as he drowned, became an ogre down below, and assailed ships from beyond the grave.
Of all these folk tales, vampiric and ogrish elements seem the best. Perhaps a number of ghosts, trapped as wrecks, begin to emerge as the ocean ebbs back. Perhaps dark creatures come forth. But why? And what is our story in all this?
It seems clear that the travel and exodus is itself the story. We would do well then, to begin in Providence. Some warning will come, as always precedes divine wrath. In all likelihood a mad prophet will come, not be believed, and then become leader as the omens grow. I suspect there will be no survivors of this incident. Given the wreckage at Hanton, I would think they escaped a slave ship. Perhaps, actually, the ship has run aground with the ebbing tide.

Surviving the walk to the ‘island’ proper then becomes key to the story. Beasts and ocean creatures must be contended with along the new beach, and then there are the panicky colonists on the island that must be avoided or reasoned with. I think this certainly has promise, with the danger of a new land and the growing threat of holy retribution. The Congregational Dome, I think, ought to fall last. As a climax, with some horror revealed beneath it or flying out of it. What is lurking in there, I don’t know?

I found all of my Rhode Island folklore here, from this lovely blog. If you know more horror stories of Rhode Island and providence, please share them! Maybe you’ll find a strange corpse in the deep!

2 thoughts on “Rhode Island and More!”