This Week’s Prompt:20. Man journeys into the past—or imaginative realm—leaving bodily shell behind.

The Resulting Story:The Prophecy Of Tammuz

Welcome back brothers and sisters of the Undead Author Society. We have quite a bit to discuss in this little prompt, so please bare with me. We have to go to strange and odd places, as there’s a great deal to talk about with time, space, and the mind.

Firstly, the basics. The idea of out-of-body experiences was common and accepted in certain circles by the time of Mr. Lovecraft. Astral projection, as it is commonly called, has a rich tradition dating back millenia. Famous works such as The Divine Comedy are found the world over, detailing adventures into the underworld or strange locations, fairy realms and spirit lands.

In particular, in certain sects of shamanism and the like, astral projection is a means not only to see wonders, but to correct wrongs. The spirits must be battled or confronted, but This is still a somewhat common trope in fantasy, as the successful Nickelodeon cartoon Avatar the Last Airbender and Cartoon Networks Gravity Falls to a lesser extent show.

However, what is less common was it as a means of travel. A common idea in the early days of science fiction was the use of astral projection instead of other more mundane means of interstellar or temporal travel. Examples include the seminal John Carter of Mars and Mr. Lewis’s Cosmic Trilogy . The notion has mostly by now been abandoned in favor of spaceships, with actual real world success resulting in the dismissal of more fantastic or pseudo scientific ideas.

Thus the imaginative realm Lovecraft refers has the great potential to be a dream scape, such as the wondrous Dreamlands we have already discussed, or a foreign world. Or even the past. But the past seems more banal, with our modern minds knowledge, then either of those places. How could these be mistaken for one another?

It must be remembered that the past, in Lovecrafts time, was still being uncovered. The age of the world was growing, but how old say, humans, were was less set in stone. Lovecraft and his fellows thus populated the past with human and inhuman nations on a multitude of lost continents, a trait that sadly dates them somewhat. As tectonic plates were just being discovered, to Lovecraft the sudden sinking of Ryleh or Atlantis in a few thousand years seemed totally reasonable. Today, baring the supernatural in the case of both, we also have observation of the ocean that derails the horror somewhat.

This notion of prehuman ancestors also owes it self to one of the…unsettling influences on fantasy, horror, and science fiction of the day, particularly weird fiction. The occult, in particular, the Theosophical society. An oddity of occultism, part of the Theosophical societies doctrine included the notion of ‘root races’ who were increasingly involved in the operation of the world and built large scale civilizations that eventually fell. The society aimed to manipulate or guide human evolution according to heavenly precepts, to better receive a world teacher. 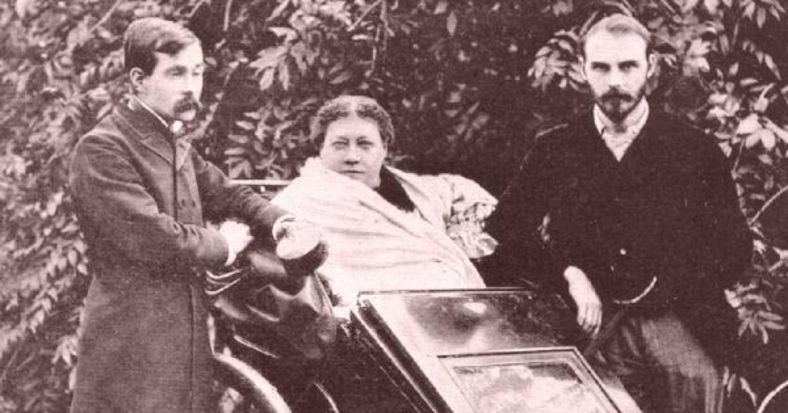 The reason this is appealing to weird fiction authors ought to be obvious. Even at a superficial level, it invokes conspiracy, strange alien masters, ancient relics and technology, and the expansion of humanity into the unknown. The problematic part occurs when considering the ‘root races’, particularly the assertions regarding Aryan superiority over semetic peoples. The inherent racist overtones of Theosphony’s pseudo scientific eugenics make it a poor choice at times, except in the broadest of strokes. Still, some of the fantastic material may be mined (reading the wikipedia page on root races alone, you can see the outlines of Numenor et al. With dark magics and human hybrids)

That in mind, what sort of story presents itself from the prompt? We might begin with the notion of time travel instead of spatial travel. While time travel is a dangerous plot utenzil, it allows for immediate effects and raises some unsettling stakes. There is a paranoia to the idea that, at any moment, the past might be rewritten and we would know nothing of it.

It is best then that we have about five characters, it seems. We have one who travels between worlds, two who dwell in modernity, two who dwell in the past. It is probably best that the travelerer not know he is in the past, but rather believe he is in some new fantastic locale. We want a careless protagnoist, who will unwitting cause damage or change. Such is the Lovecraft way.

That said, we must have a conflict with his new and alien surroundings. This seems easy enough, given that our mystery magnificent culture can certainly provide clash. It would do well to think on what sort of conflicts however. It would be in poor taste to insist that modern virtues are superior in every way to past ones. The past was not a savage hell that only needed modern reason to solve its problems, nor is the present a logical utopia.

On the other hand, the past was not a rosy innocent time where the only problems were solved with simple discussion, nor is the present a cold emotionless hell from which we cannot escape. Some work must be done, then, on this past culutre and determining the present of the story. We might do a present a bit off from ours if we want to make things easier (the sins of two pasts are easier to see then the sins of the present and past, and are less likely to cause uproar).

But that is exactly why we should not do that. This is horror after all, and what’s the point if you don’t leave someone unsettled? Now back to our tales outline. First, we must arrange the present. The when, where, and who. After this, we send our traveler tumbling backward into the past, through some accident (probably of a head injury, though a simple sleep could do in a pinch.Either is random enough). We present the past, and the lead makes choices, causing some change. He returns to the present, only to find it altered.

Now, the alteration itself is tricky. How grand an operation should it be? A great deal of short story work has been done with small changes, linguistic differences or the like. Grander changes have some stereotype to them (how many times will Nazis win WW2? Or the Soviets the Cold War?), so they may have more room to explore.I think a medium is need. Not one small change, but hundreds. Noticeable, but not insurmountable differences reflecting the characters choice.

Onto the character, I have noticed we haven’t done a non-white person. Perhaps that will be worth a swing, to better diversify our cast. I wonder also about the genre. Mr. Lovecraft was not just a horror author. He wrote fantastic tales, such as the Dream Quest for Unknown Kadath and was good friends with the seminal creator of Conan the Barbarian , Robert E. Howard. takes place in the same world as the Mythos. Perhaps we will simply stick to fantasy for this one.

The fullness of that development is more than one of these posts has time for. Needless to say, I will endeavor to make it surprising. What clear paths do you see? What changes would you make? What worlds would explore?

4 thoughts on “Out of Body, Out of Time”